You are here: Home / Natural Remedies / What Are The Potential Benefits Of Royal Jelly? 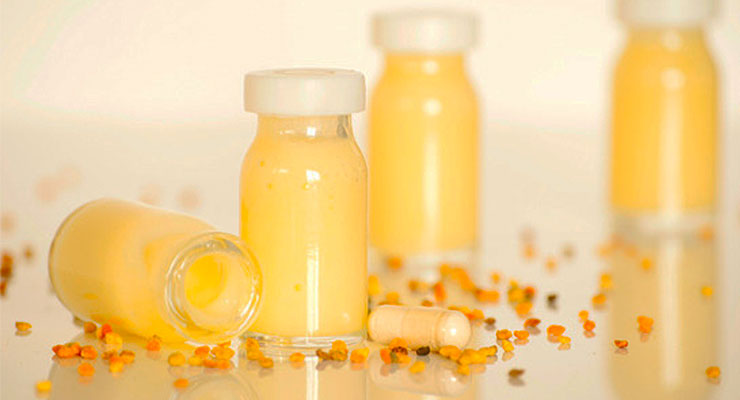 Believe it or not, royal jelly–a secretion produced by honey bees–is quickly becoming a hot topic in light of all the possible benefits that can come from the milky substance.

Although the researchers have yet to explain all the why’s and how’s, individuals around the world are becoming interested in what studies have suggested so far. Here’s a look into royal jelly and its accompanying offerings.

What Can Royal Jelly Potentially Do For You?

Acting as a Health Tonic

Royal jelly is a watery substance that contains protein, sugar, fat, vitamins and salt. Worker bees actually use royal jelly when caring for their beloved queen bee, which is an interesting fact to note when trying to identify all of the potential medicinal benefits that can come from this bee derivative.

Since the scientific research is sparse, many people who consume royal jelly do so as a general health tonic. In animals, the solution seems to provide antioxidant-like protection against malignant growths and cardiovascular problems like plaque buildup in the arteries and high cholesterol. In hopes of boosting the immune system and their overall well-being, some individuals take a serving of royal jelly everyday.

Depending on consumer preferences, some individuals purchase royal jelly still in jelly-like form, the substance often having been combined with a base of raw honey. This combination can then be consumed straight from the jar by itself or added to a small glass of water. Other individuals looking to include royal jelly into their routine ingest the product in capsule form with the jelly itself having been freeze-dried and naturally transitioned into powder.

According to some research, royal jelly may be effective in minimizing PMS-related symptoms including irritability and weight increase. The bee-derived substance may also help reduce the unwanted side effects that come from menopause. In studies, patients are often given a combination product that includes other components such as flower pollen or bee pollen extract so the effects of using royal jelly in isolation aren’t as established.

Reducing the Signs of Aging

Royal jelly can actually be found in some beauty, skincare and hair care products. Packed with antioxidants and other nutrients like proteins and minerals, royal jelly may be a rejuvenating treatment that helps protect the skin against wrinkles and discoloration that can come from damaging rays. In addition to helping fight the effects of aging and provide needed hydration, royal jelly may also be able to help stimulate hair growth and treat various skin disorders, but more research is needed in order to confirm those assertions.

Keep in mind, some individuals can be highly sensitive to royal jelly as a topical treatment so if you’re trying it out for the first time, you may want to check with an allergist beforehand about running an allergy test so you can understand what effects the substance can have on you. It can be helpful to glean this information in the safety of a professional’s office who can immediately treat you if you happen to be among those who can’t handle coming in contact with the bee-produced secretion.

Researchers have noticed that royal jelly may be able to help improve the human cholesterol profile, decreasing the bad cholesterol levels and increasing the good cholesterol levels for a one-two punch protecting against heart disease and other cardiovascular problems. Although the correlation isn’t absolutely understood, this kind of benefit can be seen in many healthy foods so it’s not out of the question that royal jelly may similarly be able to perform such a great feat. As seen in animal studies, the substance may also be able to help lower blood pressure.

What Are the Possible Dangers of Taking Royal Jelly?

Unknown Consequences of Royal Jelly on Pregnant and Nursing Women

The scientific world at large has not taken a stance on if royal jelly is safe or harmful for pregnant women, unborn fetuses and nursing infants.

While some pregnant women avoid consuming honey to avoid bacteria spores that may increase the risk of infant botulism, other women still feel comfortable consuming honey in regular food amounts. Royal jelly may or may not contain contaminants unfit for growing babies; we don’t really know.

Royal jelly also features some estrogenic activity, the full effect of which to pregnant women is again unknown. To be on the safe side, you can avoid the consumption of such a substance while pregnant and breastfeeding. You can also talk to your doctor about your specific situation if you feel like royal jelly is a serious treatment plan that’s essential in your life at present.

Royal Jelly Can Cause Allergic Reactions

When consumed or topically applied, royal jelly can cause severe allergic reactions in certain individuals. Side effects on the skin can include allergic rashes and inflammation while the body can also experience the swelling of the throat and asthma problems. In extreme cases, stomach pain, colon bleeding, bloody diarrhea and even death are possibilities.

The Long-Term Effects of Using Royal Jelly are Not Known

Although royal jelly is becoming more talked about and easier to find in stores, the long-term effects of taking the substance are still unresearched. Individuals wanting to regularly consume medicinal amounts of royal jelly are doing so at their own risk. The bee-derived product is marketed as a dietary supplement, which we know falls in an industry that is not highly regulated by the FDA or any other governing and authoritative body. No credible organization is reviewing company claims on the safety and effectiveness of any given product.

The Dietary Supplement Could Negatively Interact with Your Medications

Royal jelly may increase the effectiveness of certain medications and may cancel-out the benefits of other products. If you regularly take any prescription or over-the-counter medicines, talk with your pharmacist or doctor about the possible interactions that royal jelly can have with your current dosages. For example, royal jelly might heighten the effects of a treatment like warfarin, which can actually be dangerous because such patients who take both substances can then have an increased risk of bruising and bleeding.

Royal jelly may be a valuable dietary supplement for some and a dangerous allergen for others. The bee-produced secretion is additionally being studied for further health benefits when dealing with various conditions such as bone fractures, liver disease and stomach ulcers. Because not much has been conclusively verified in terms of claimed benefits, those individuals who are very conservative about the types of alternative medicine approaches they take will likely want to stay away from royal jelly at present.

Others who are more experimental with their treatments may be interested in taking such a substance, knowing that they are entering some of an unknown territory. As always, working with a healthcare professional when sampling new supplements and trying out various health programs can help you stay safe.

April is a passionate blogger, singer, globetrotter as well as a nutrition and healthy lifestyle enthusiast. She is a certified Kundalini yoga teacher and a Reiki master. April currently lives and works in Amsterdam. April’s other topics of interest are meditation, holistic cooking, beauty care and pets.